A common criticism of “smart growth” is that it is relatively unaffordable to buy a home in a smart growth community.

There is too often an issue that is so very easy to sweep under the rug in these sorts of “affordability” debates.

Dumb, sprawl growth is, almost by definition, auto-dependent. Smart growth, conversely, creates transportation choice — when done in-town, over the long term, or both.

While it may seem, superficially, that a house in a remote location is “more affordable” 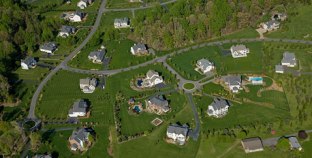 because it has a lower purchase price than a house in a walkable location, a lower-income family that is forced to own 2-4 cars in that remote location will often find that such a “bargain” house is more of a financial strain than the in-town house (where, say, only 1 or 2 cars might be needed).

The lower transportation cost of houses in smart developments is why, in some markets, Fannie Mae has adopted the location-efficient mortgage, which recognizes that (smart) locations rich in transportation choices are locations where households have more income available to pay for such things as the mortgage (because less income is being spent for transportation).