Boulder CO Struggles with Too Many Jobs

A friend asked me what I thought about Boulder, Colorado trying to get a handle on the “problem” of too many jobs.

Here is what I told her…

In looking at Boulder efforts, I think it would be wise if Boulder went ahead with its proposal to expand the use of mixing housing, jobs, and retail. This step is very important for quality of life, but because nearly every community is its own worst enemy, such a policy would undoubtedly draw a FIRESTORM of opposition in Boulder, as it has done in the past in that city.

Working toward a jobs-housing balance is a good idea, as the City proposes.

The big mistake that nearly all communities continue to keep making is to look upon in-town traffic congestion as THE evil that must be fought at all costs — apparently the primary evil being targeted in this Boulder jobs-housing study. Unless Boulder can find the wisdom and leadership to accept congestion as an ALLY and not a foe, it will increasingly degrade itself. I say this because the conventional tools to fight congestion are tools that Boulder seems eager to want to use. While more mixed use and jobs-housing balance is a good idea, conventional (and, in the end, destructive) tools include:

It is crucial that Boulder realize that not only is congestion an ally–it promotes more compact, walkable urban development, reduces regional air pollution and fuel consumption, slows cars, etc. Congestion is also SELF-REGULATING. People have a tolerance level for how much congestion they are willing to put up with, and will decide to do things to adjust if it gets too intolerable: They’ll live closer to the places they need to go to (work, school, shopping…). Or they’ll drive on different routes. Or drive at non-rush hour times. Or start walking, bicycling, or using the bus. People that cannot do any of those things (probably a lot of people cannot do those things Boulder) will, in the long run, simply move somewhere else in the country. Probably something not considered catastrophic for folks in Boulder…

Fighting against development density, or fighting for BIG ROADS, short-circuits that self- 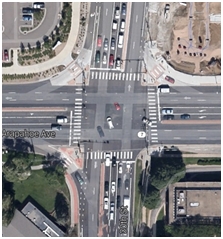 regulation. By doing so, it accelerates the downward spiral of a community’s quality of life. Because it means that the city is increasingly making life pleasant for cars instead of people. It will end up as a big roads, big parking lots, strip commercial land of misery.

Not sure what to do about that. Maybe nothing needs to be done. It is a problem that may sort itself out on its own.

For me, personally, I have a very low tolerance level for congestion or long commutes. Even a high quality of life is not sufficient compensation for me (for many in Boulder, the quality apparently DOES compensate). If I were to live there and accept the relatively high congestion and commuting patterns there, the only way I could do it would be to figure out a way to live in or near downtown. If I could not figure out a way to do that, I’d leave the Boulder region.

In other words, congestion controls not only the location of growth, but the rate of growth…