A Lifetime of Achievements

Dom Nozzi has a Bachelor of Arts degree in environmental science from SUNY Plattsburgh and a Master of Science degree in town and transportation planning from Florida State University. For 20 years, he served as a senior planner for Gainesville Florida and was briefly the growth rate control planner for Boulder Colorado. Today, he maintains a consulting practice in which he writes and speaks about street design, urban design, and quality of life. He is an experienced public speaker, speaking primarily about sprawl, congestion, smart growth, quality of life, and urban design.

He served for a number of years as a Complete Streets instructor for the National Complete Streets Coalition for communities throughout the nation. He has been a member of the Congress for the New Urbanism. He authored several environmental, transportation and urban design plans and regulations for Gainesville. He is in Who’s Who for the South and Southwest. His most recent urban design book, The Car is the Enemy of the City,  was published by WalkableStreets in May 2010. His first book, Road to Ruin: An Introduction to Sprawl and How to Cure It, was published by Praeger Publishers in 2003. Mr. Nozzi is a contributing author to New Urbanism and Beyond, published by Rizzoli Publishers.

As a Senior Planner for the City of Gainesville from 1986 to 2007, he authored the Environmental Conservation, Recreation, and Solid Waste Elements of Gainesville’s 1991-2001 Comprehensive Plan, and the Future Land Use, Urban Design, and Transportation Elements of Gainesville’s 2001-2011 Comprehensive Plan. He crafted “concurrency” (“adequate facilities”) standards for roads, parks, and solid waste. He prepared or revised ordinances pertaining to the protection of creeks, lakes, wetlands, wellfields, nature parks, upland ecological communities, and gateway streets. Other ordinances he prepared or revised include noise control, landscaping and tree management, animal control, sign control, downtown Traditional City overlay, planned unit developments, and traditional neighborhood developments (TNDs).

He was the lead planner for Gainesville’s 26-mile greenway trail system. He served as editor for the update of the city’s “Development Guide,” which is an award-winning guide describing, in layman’s terms, the steps one must follow to go through the city’s development process, and a graphic and written summary of various planning concepts and city development objectives. He was awarded Employee of the Month for the City Department of Community Development in 1987 and Employee of the Year for the Department in 1993.

He was the Duckpond Neighborhood Association president in Gainesville Florida from 1999 to 2005.

He has been an adjunct professor for the University of Colorado at Boulder in 2010 and 2011. He served on the Boulder Transportation Advisory Board from 2013 to 2018. He served on the Whittier Square Condominium Association Board of Directors in Boulder from February 2019 through December 2019.

As of 2020, he has undertaken 40 years of academic and professional work in transportation planning. He has been a daily bicycle commuter for over 42 years as of 2019. He has been a bicycle commuter in Rochester New York, Flagstaff Arizona, Plattsburgh New York, Tallahassee Florida, Gainesville, Bloomington Indiana, and Boulder. He was lead planner for the Gainesville greenway transportation system (1993-1996). He was a member of the Alachua Greenway Alliance in Gainesville (1994-1996). He served on the Gainesville Metropolitan Transportation Planning Organization Design Team (1998-2007). For Gainesville, he wrote the Gateway Streets ordinance, the Greenway ordinance, the Street Connectivity ordinance, and regulations to preserve and enhance the livability of neighborhoods — traffic calming, transect, pedestrian and traditional design (1986-2007). He wrote a pedestrian-oriented form-based code for the Gainesville town center (1998). He wrote the long-range transportation mobility plan for Gainesville (2000-2010). He served on the Board of Directors for Bike/Walk Virginia (2009). He is a former member of the Association of Pedestrian and Bicycle Professionals (2008-2014). He is a nationally certified Complete Streets Instructor. He co-instructed seven Complete Streets workshops in various US cities in 2009 and 2010. He has delivered 93 public speeches pertaining to transportation in cities throughout the nation (1992-present). He taught a “Designing for Sustainable Transportation and Quality of Life” course for the University of Colorado Continuing Education and Professional Studies in Boulder (2010, 2011). He formerly served on the PLAN-Boulder County Board of Directors. While on that Board, he authored a Transportation White Paper that was ultimately adopted as the official position of that organization.

Selected Published Articles He Has Authored

In 1972, he set the Scribner Road Elementary School (Penfield New York) record in the triple jump.

In 1973, he was selected as the most improved player on his Penfield Little League baseball team (Sunrise).

In 1977, he made the second-team all-county as a flankerback for high school football players in Monroe County New York. His teammates selected him as the offensive player of the year. He was also selected the most improved player on the team.

In 1978, he was a leading long-jumper and triple-jumper in Monroe County New York (he briefly held the school record in the triple jump), and was selected as a representative of the County for the triple jump at the High School Track and Field championships in Long Island New York.

In 1978, his classmates in the Class of 1978 selected him as the shyest guy in his senior

Click here for photos associated with his participation in Penfield High School football and track & field.

In 1978, he made it to the Dean’s List because of his 3.89 Grade Point Average at Northern Arizona University in his first semester as a Freshman.

In 1983, he had a 4.00 Grade Point Average in his first semester as a graduate student at Florida State University.

Employee of the Year, City of Gainesville Florida, Department of Community Development. 1993.

Association of Pedestrian and Bicycle Professionals.

Congress for the New Urbanism.

Professional Committees He Has Served On

Bike/Walk Virginia. Board of Directors. 2009.

Places He Has Visited

Click here for a map showing the worldwide locations he has visited. He has gone on self-guided tours of 56 cities in Italy, 12 cities in Spain, and 15 cities in Germany (113 cities in Europe overall).  He has visited 40 states in the United States and 26 nations in the World.

Places He Has Lived*

Adventures He Has Engaged In

To learn how to engage in self-guided, affordable, unforgettable travel to the historic old town centers of Western Europe.

A Photo Diary of His Life

Click here for a photo slide show of his life.

Hiking He Has Done in Colorado*

Ski Resorts He Has Skied*

Scuba Diving He Has Done*

He has scuba dived at 171 scuba diving sites, including Belize, Little Cayman, Cozumel, the Florida Keys, Roatan Honduras, Hawaii, Bonaire, and the US and British Virgin Islands. His maximum dive depth was 138 feet at the Great Blue Hole in Belize. Click here for a video of his all-time favorite dive – the Manta Ray Night Dive on the Kona Coast of the Big Island in Hawaii. Click here for his all-time favorite wreck dive (which occurred in Honduras).

Click here for his description of jumping out of a perfectly good plane in Williston, Florida in February 1995.

Click here for a video showing him paragliding over Wonderland Lake in Boulder CO.

He is an accomplished single-track mountain biking enthusiast as can be seen by clicking here and here.

He has whitewater rafted 11 rivers in 7 US states and 2 rivers in nations outside the US. He has also whitewater kayaked on Boulder Creek CO.

In the spring of 2018, he had an enormously beneficial dietary epiphany. Click here for his essay about this.

Houses and Land He Has Owned or Co-Owned*

Historic Duckpond Bungalow on NE 5th Street in Gainesville. In the late ’80s, he bought a cute little 55-year old bungalow in the historic Duckpond neighborhood. The bungalow was the first house built on N.E. 5th Street, which was called Kentucky Avenue at the time. He spent a lot of time and money restoring the house, including installing a solar water heater on the roof, building a wood deck, re-doing the bathroom and kitchen, repainting the interior and exterior, and re-wiring the electrical system. In 2001, he did an exhaustive title search to assemble a history of ownership on the house that reaches back to when it was built in 1935. Click here for photos of the bungalow.

Flamingo Hammock on SE 27th Street in Gainesville. Click here for photos of the 10 acres he owned.

Kelley-Swords House on NE 4th Street in Gainesville. Click here and a description of the house, and here for photos of the house.

Historic Rowhouse on Floyd Avenue in Richmond Virginia. Click here for photos of the house.

Holiday Rowhouse on 16th Street in Boulder. Click here for photos of the house.

Spruce Street Condo in Boulder. Click here for photos of the house.

Number of Books and Book Pages He Has Read*

On November 15, 2018, he was honored to learn that blog comments he had posted to one of his blog sites (regarding the 40 people in cars, in chairs, on bicycles, and on foot 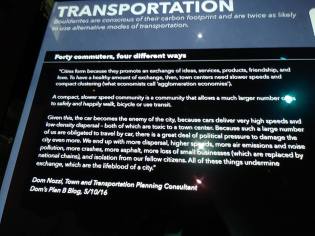 photo set) was featured as an exhibit in the Museum of Boulder “The Boulder Experience” gallery.

Letters to the Editor Published*

46 letters to the editor published in the following newspapers:

56 guest opinions published in the following newspapers and magazines:

Tally of Blogs He Has Written*

93 public speeches given. He has given speeches in the following cities:

He gave several interviews on his speaking tours. Examples can be found by clicking here, here, and here. An example of his “Road to Ruin” speech can be found here.

Check  out this May 2020 Active Towns Podcast interview of him and his partner Maggie, where they describe their love of their walkable and bikeable lifestyle living in town center Boulder CO, creating a “PorchFest” in Boulder, and the guidance they are offering on their FollowOurFootprints.com travel blog based on their years of travel in Europe.

Newspapers That Have Quoted Him*

Evansville (IN) Courier and Press

He formerly brewed his own beer and wine. He formerly made his own pasta before he gave that up when he adopted a low-carb, high-fat diet.

He has run the New York City Marathon, is an avid traveler and adventurer, scuba diver, hiker, kayaker, bicyclist and skier.

He now lives in Boulder, Colorado.