An Unintended Consequence of Development Regulations Consistent with Long-Range Plans

Florida adopted a rule that requires all cities and counties to adopt a 10-year comprehensive plan every 10 years, and also requires local governments to make their land development regulations consistent with their (hopefully) visionary long-range comprehensive plans.

Sounds, at first, like a wonderful idea. After all, isn’t it true that lack of consistency between the two documents is an important cause of a failure to implement the long-range plan vision? 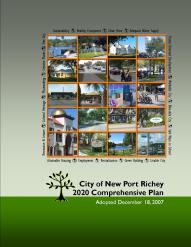 But this consistency is not necessarily cause for celebration, at least from what I learned about watching it work (or not work) in Florida. Sadly, there is an unintended consequence.

Ensure that the adopted long-range plan is relatively reactionary.

Note that the above occurred in my community DESPITE the fact that the majority of city commissioners who voted to adopt our comprehensive plan were visionary new urbanists.

In retrospect, perhaps there is something to be said for a comprehensive plan that is “advisory” rather than “mandatory”.

The former creates more of a likelihood that the plan will have a vision.