The Importance of a Relatively High Floor Area Ratio (FAR) 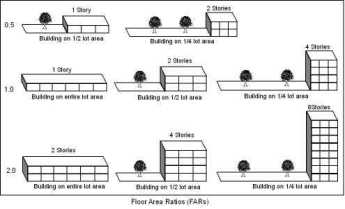 An FAR of 2.0 means the developer is allowed to build the equivalent of a two-story building over her entire lot, or a 4-story over half the lot.

An FAR of 0.5 means the developer is allowed to build the equivalent of a one-story building over half her entire lot, or a 1-story over half the lot.

I should hasten to point out that while these numbers seem very dense, keep in mind that in almost every case except in, say, the middle of a downtown, an FAR of 1.0 would NOT allow the developer to build one story over the entire lot, as other development code regulations would ALSO require space for landscaping, open space, parking, setbacks, etc. Thus, an FAR of 1.0 would almost never result in a one-story building over an entire lot. It would probably be a one-story over less than the full lot to be able to fit in the landscaping, etc. In effect, what FAR limits do is control the amount of building floor area, and often don’t really tell you how much of the site will be covered by a building.

Walkable urbanism and healthy transit require FARs to be at least 1.5 to 3.0. In Europe, those loveable cities we all love to walk have FARs that are probably well over 3.0. In 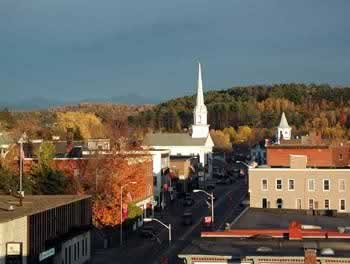 America, as you can imagine, most of our commercial areas have developed FARs of about 0.1 (with most space taken up by surface parking).

Therefore, if a community wishes to encourage more walking and vibrant, sociable urbanism, it should require at least 1.5 FAR. Anything less than about 1.0 locks a community into sprawl, extreme auto dependence and downwardly spiraling downtowns,
because low FARs create unwalkably large spaces that are more car-scaled than people-scaled. People feel more comfortable in the quaint, enclosed spaces created by, say, 2.0 FAR buildings. They feel exposed and in a “no-man’s-land” when FARs are less than 1.0 (which is fine if you are inside an SUV…)

Note that I am NOT suggesting that we require more than 1.5 FAR everywhere in a community. Only in in-town places where more walking and urbanism are being promoted do we want to see 1.5 FAR or more. In suburban and rural locations, it is generally okay to have an FAR of 0.5 or less — unless you are trying to create a walkable neighborhood center (a sea-of-asphalt shopping center that is to be transformed, for example) in the middle of a suburban location.

Here is an excerpt from the Urban Design Toolbox I wrote for Gainesville, Florida that will forever collect dust on a shelf due to its “controversial” suggestions (and despite the Gainesville Plan Board demanding that it be published):

“…  In commercial areas, FAR should be at least 1.0. In office/industrial and mixed use areas, it should be at least 1.25 (Snohomish County WA).  Richard Untermann, a well-known urban designer, calls for FARs of 2.0-3.0 in town centers, and 3.0 for office areas.  San Diego requires at least 0.5 FAR near bus stations.  To increase employment densities, Orlando requires both a minimum and maximum FAR for most commercial zoning.  However, a FAR of 1.0-2.0 is considered ideal for creating transportation choices, yet Gainesville allows less FAR than this in town centers.  Every 20 percent increase in floor space in commercial centers developed as non-office uses is associated with a 4.5 percent increase in ride sharing and transit use…”

I’ve not given much thought to how we should design low-density residential areas, in part because nearly all of the regulations of most all American communities are intended to serve such a lifestyle, which means “we’ve got that covered — no need for more work there.” In effect, what that has meant for me is that I generally assume that the existing FARs that a community has adopted should presumably be appropriate for low-density residential areas.

Note, however, that usually, a community does not have an FAR rule for its single-family areas, probably because generous setback requirements, strict height limits, and the strong market desire for low density means there is very little danger of “too much” floor area in such neighborhoods.

In many cases, the community looking at addressing the needs of various neighborhoods or sub-areas of the community needs to make a decision about what the future intent will be for a neighborhood. Is the intent that the neighborhood remain low-density, smaller and more affordable houses and auto-dependent? If so, it would be appropriate to have an FAR of 0.5 or lower. If, on the other hand, the neighborhood has historically been low density and smaller in house size but is located near a part of the community that is intended to be more walkable and urban (such as neighborhoods adjacent to a transit center or town center), it would probably be appropriate to have higher FARs or no FAR limit so that the neighborhood could incrementally transform into a place that is more walkable, more urban, and perhaps more wealthy (due to the larger size of the homes or the high desirability of the location (in this case, being near all the urban action).

Healthy communities sometimes acknowledge that the historic character of a neighborhood should not be forever frozen in its current character. Sometimes, a neighborhood may have been originally built as a low-density residential area with smaller homes, at a time in which it was remote from the more urban locations of a city. But over time, those urban locations may grow in size or see the emergence of a new “satellite” downtown (such as a shopping center that has been rebuilt to be like a walkable downtown). In such instances, it is usually in the best interest of the city to encourage low-density neighborhoods that are now near urbanized areas to incrementally become more urban and walkable themselves.

In general, such transformation is a response to a market shift. If a historically low-density neighborhood is now within walking distance of where the urban “action” is, there will be more demand for folks who seek a walkable lifestyle to own a home in such a place. Also, when the neighborhoods near an urban center become higher density, they make the urban center more healthy, because a denser neighborhood brings more pedestrians and less cars — and excessive numbers of car trips are deadly to an urban center.

If we didn’t allow this to happen in cities, we’d have farms next door to skyscrapers in downtown NYC.

Local Government Development Regulations as a Recipe for Sprawl

I worked as a town planner for Gainesville, Florida for 20 years. Like most cities, Gainesville’s plans, policies, regulations, elected officials, and planning staff proclaim that the City supports compact development, more bicycling and walking and transit use, and less sprawl.

Tragically, however, Gainesville has adopted a long list of development regulations that require dispersed, drivable suburbia. Examples are nearly endless.

Gainesville’s building setbacks, like in nearly all cities, are gigantic and desperately fought for by staff.

Gainesville’s parking requirements, like in nearly all cities, are ENORMOUS, and staff aggressively fights for as many parking spaces as it can extract from the developer. To do this is to be a “hero” for nearby neighborhoods concerned about “spillover” parking – one of the great bugaboos in American town planning.

Nearly everyone in Gainesville — including most public works staff — join the Florida Department of Transportation in fighting for HUGE intersections and wider roads (I recall that my proposal to limit use of turn lanes downtown in the Transportation Element I prepared for the City was shot down, and my 4-lane maximum road size was subsequently removed after the plan was adopted.

Sidewalk requirements don’t really do much to discourage sprawl when located in suburbia, because distances are too large to encourage people to walk to destinations. They just ease our guilty conscience.

Maximum “floor area ratio” (FAR) requirements (which set the maximum square footage of building that can be built on a property) are extremely low. Low FARs strongly discourage walking, and undercut the need for creating an urban fabric that possesses human-scaled charm.

Maximum building height limits are nearly always less than 5 stories. As such, compact urbanism is extremely difficult to achieve.

The City adopted a huge and growing “transportation concurrency exception area” (TCEA). This was done when it was realized that requiring developers to show that “adequate” road capacity was available for the new car trips the development would produce was counterproductively promoting car-oriented sprawl. But instead of adopting a TCEA that covered only the relatively discreet downtown, Gainesville adopted a TCEA that applied to the entire city – including suburban locations.

And even if it properly only applied to the downtown, it would still have been unhelpful because it did not effectively require any form of meaningful compact urban design. To correct this, the City should have only been granting a TCEA if the City was getting urbanism in exchange for exception. As it is, all the City got was what amounted to little more than a few shrubs for landscaping.

Overall, Gainesville – like nearly all cities in America – has adopted land development regulations that ensure a future of unlovable, car-happy sprawl.

How odd, since the plans and elected officials and staff always seem to be united in opposing sprawl…

“FAR” is a land development regulation used by planners and developers, and is found in most town zoning regulations. It refers to the “Floor Area Ratio” of a development. As an example of how FAR is used, an FAR of 1.0 allows a single-story building to cover an entire plot of land, or a two-story building to cover half of the land in question. An FAR of 2.0, therefore, allows a two-story building to cover an entire plot of land, a four-story building to cover half of the land, or an eight-story building to cover a quarter of the land. And so on. NIMBYs (Not In My Backyard) in communities throughout the nation tend to be well aware of FAR regulations, and often counterproductively fight aggressively to minimize the FAR ratio. I recommended relatively high FARs in town centers or other places where compact, higher-density development is desired because it is well known by researchers that low FARs kill transportation choice. Walking, biking and transit are nearly impossible when FARs are low. I also happen to believe that higher FARs are much more charming and lovable (when done right). Most NIMBYs improperly assume that higher FARs mean that all greenspace on a lot or in a neighborhood would be consumed by asphalt or buildings. 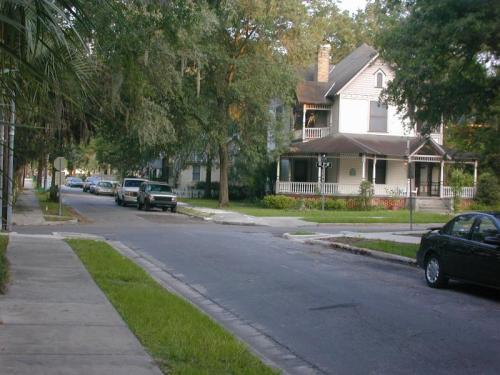 Ironically, the places that most all of us love most (including NIMBYs) are those places with relatively high FARs (much higher than NIMBYs want when they yell and scream at public meetings). It would be nice, in site plan review, to do two things: 1. Invite citizens randomly throughout the community to attend the public meeting (as suggested by Andres Duany) so that you reduce the NIMBYism associated with the typical scenario where only those living close to the project are invited. A broader geographic range of citizens attending development review meetings is much more likely to elicit support for a fuller range of community quality of life objectives, rather than more narrow, emotional, counterproductive NIMBY sentiments. 2. Figure out a way to allow citizens who attend (or vote at) the development review meeting to somehow FEEL what the design will be like. This can be done either by having people visit a representative site so they can feel it and see it with their own eyes, or prepare quality 3-D images for the presentation. Just stating what the FAR will be for the project with a number (“this project has an FAR of 2.0”) can easily terrify those who are not designers. _________________________________________________ Visit my urban design website read more about what I have to say on those topics. You can also schedule me to give a speech in your community about transportation and congestion, land use development and sprawl, and improving quality of life. Visit: www.walkablestreets.wordpress.com Or email me at: dom[AT]walkablestreets.com