The Case Against the Colorado Transportation Sales Tax (Proposition 110)

I have almost 40 years of academic and professional (and lifestyle) experience in the field of transportation, which is why I am without hesitation voting AGAINST the Proposition 110 sales tax increase for Colorado transportation funding, and urge all Colorado voters to also vote against this measure.

Some bicycling, walking, and transit advocates are joining with motorist and sprawl advocates in voting for this measure because a token amount of the revenue is slated to be directed towards those forms of non-car travel.

However, I think doing so is a terrible mistake. Why? Because on balance, we take a giant step backwards in promoting bicycling and walking and transit (not to mention a host of other social and municipal objectives) if we pass 110.

The positives of 110 are that a token amount of dollars will be allocated to improvements for cyclists, walkers, and transit. What will be the outcome of doing that? We will see a trivial increase in bicycling, walking and transit use. Worldwide studies show over and over that to be effective in seeing a meaningful shift from car travel to walking or bicycling or transit, we must take things away from motorists (speed, subsidies and space). It is not about providing more sidewalks or bike paths or buses.

By contrast, the negatives of 110 are enormous, because hundreds of millions of new tax dollars will now be made available to widen highways, roads and intersections. If anything, we need to be narrowing a huge percentage of our bloated, oversized roads, 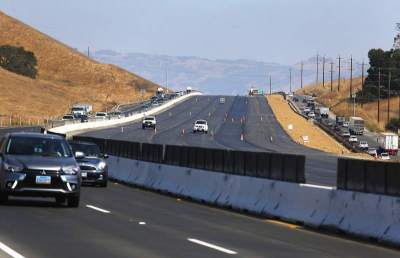 highways, and intersections. Negatives: a large increase in unaffordable and ruinous suburban sprawl, a large increase in per capita car trips and car travel distances, a large increase in air emissions (which destroys our ability to address climate change in the future), much larger levels of traffic congestion (because it artificially induces new car trips and more remote development that would not have occurred had we not widened), a large increase in traffic fatalities, an increase in the massive financial woes of state and local governments (who cannot afford to maintain our existing infrastructure, let alone the new infrastructure 110 will fund), a substantial worsening of public health, a much more ugly environment in Colorado, a loss of enormous ecologically sensitive areas that would now be replaced by new development, and a big decline in bicycling, walking and transit use.

When we compare the positives and negatives, the net result for bicycling, walking and transit — not to mention the very many social and municipal objectives — shows 110 to be far and away more of a bad deal than a good deal (unless you are with the auto or sprawl lobbies).

I don’t want one penny of my sales tax dollars to go toward ruining the Colorado I love. We’ve poured billions of public dollars into making cars happy for the past century, and the outcome has been terrible. I will do everything in my power to fight against this measure. Enough is enough.

Some have responded to my opposition by stating that we should not let “perfection be the enemy of the good.” But in what sense is this measure “good,” on balance? By giving pocket change to building a few sidewalks? It is the equivalent of saying we should support giving the Pentagon another $50 billion because, after all, it is “good” in the sense that we are at the same time giving $10,000 to the UN.

In both the transportation tax and the Pentagon spending, the net result is a vastly worse world, even if we give a few pennies to bike lanes and diplomacy.

110 is, quite simply, a Faustian bargain.

As an aside, it is far more fair and progressive to obtain new transportation funding with user fees such as road tolls or a VMT tax.  Sales taxes, by contrast, are not only regressive to lower income folks, they also have each of us pay the same amount of tax regardless if we drive an SUV 10,000 miles from a sprawl home each year or ride a bicycle from a town center condo. This is the definition of unfairness.

We should never again widen roads or intersections, and instead should set about shrinking them to a safer, more sustainable human scale. We continue to fail to learn this existential lesson even though the road and intersection widening juggernaut has done nothing but ruin us for the past century.

We remain very far from learning such a fundamental lesson.

Dom Nozzi has almost 40 years of academic and professional work in the field of transportation, and is a lifetime bicycle, walking, and transit commuter. He has lived in Boulder since 2009.

He has a Master’s degree in town and transportation planning. Master’s thesis topic: Bicycle Transportation (1985). He has been a bicycle commuter in Rochester NY, Flagstaff AZ, Plattsburgh NY, Tallahassee FL, Gainesville FL, Bloomington IN, and Boulder CO. He was the lead planner for the Gainesville FL greenway transportation system (1993-1996). He was a member of the Alachua Greenway Alliance in Gainesville FL (1994-1996). He was a member and Vice Chair of the Design Team for the Gainesville FL Metropolitan Transportation Planning Organization (1998-2007). For Gainesville FL, he wrote the Gateway Streets ordinance, the Greenway ordinance, the Street Connectivity ordinance, and regulations to preserve and enhance the livability of neighborhoods — traffic calming, transect, pedestrian and traditional design (1986-2007), He wrote a pedestrian-oriented form-based code for the Gainesville FL town center (1998). He wrote the long-range transportation mobility plan for Gainesville FL (2000-2010). He served on the Board of Directors for Bike/Walk Virginia (2009). He was a member of the Association of Pedestrian & Bicycle Professionals (2008-2014). He is a nationally certified Complete Streets Instructor. He co-instructed seven Complete Streets workshops in various US cities in 2009 and 2010. He has delivered 93 public speeches pertaining to transportation in cities throughout the nation (1992-present). He has published two books on the topic of transportation (The first one – Road to Ruin – was published by Praeger Press, one of the leading academic publishers in the nation. Praeger has placed that book in hundreds of university libraries throughout the nation). He was a contributing author to New Urbanism and Beyond (2008).Designing for Sustainable Transportation & Quality of Life. He has served as an adjunct professor giving full-day course instruction at the University of Colorado Continuing Education and Professional Studies, Boulder CO (2010, 2011). He served on the PLAN-Boulder County Board of Directors (2014-2016) (while on that Board, he authored the transportation “position paper” for that organization). He served on the Boulder Transportation Advisory Board (2013-2018; Vice-Chair 2016-17).

The Problem of Gigantism

Gigantism, in my opinion, is a HUUUUUGE problem in America. 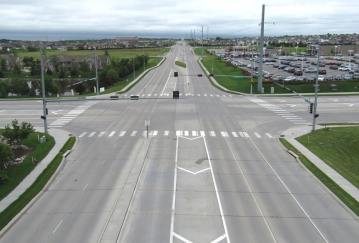 The enormity of the American land use pattern is obvious when one walks the historic center of so many European cities and towns. My recent visit to Tuscany with my significant other was, once again, so saddening and maddening because the streets we walked were so stunningly lovable, charming, and romantic. Americans have thrown all of that charm away in our car-happy world.

Not only is it impossible to love most all of urban America. It is also, as Charles Marohn points out so well, impossible to afford to maintain. A double whammy of unsustainability. And extreme frustration in my career as a town planner who toiling for decades to try to nudge our society toward slowing down our ruinous love affair with making the world wonderful for car travel. And finding that even most smart people in America strongly oppose going back to the timeless way of building for people instead of cars.

It is said that dinosaurs went extinct due in large part to gigantism. I believe the same fate is likely for America, unless our society wakes up and realizes we are way better off in so many ways if we get back to building our world at the (walkable) human scale.

A friend asked me recently what I would do if I were in charge, had a blank slate, and could design a community any way I desired.

If I had such an opportunity, my community would be much more compact and human-scaled. One can walk historic town centers in Europe for models of what I speak of here.

I would ratchet down our extreme (and artificial) auto-centric value system by making roads and parking and gasoline purchases and car buying directly paid for much more based on USER FEES rather than having all of society pay for happy cars via such things as sales taxes, property taxes, and income taxes.

In other words, making our world much more fair and equitable.

We have over-used and over-provided for car travel and car housing in large part because the cost to do so is mostly externalized to society rather than directly paid for via user fees. Eventually — maybe not in our lifetimes? — car travel will be mostly paid for via user fees and externalized costs will be more internalized. Car travel will therefore become much more expensive, signaling us to cut down on our over-reliance on it.

When that happens, we will inevitably see the re-emergence of the lovable, human-scaled world we once had. Fortunately, we are starting to see car travel becoming much more expensive and unaffordable — even though it continues to fail to be user-fee based.

And we are seeing the Millennial generation showing much more interest in compact town center living and much less interest in being car happy.

It is way past time for our society to a people-happy rather than car-happy world.